THE RISING SUN, THE NEW ALBUM BY FABRIZIO SAVINO 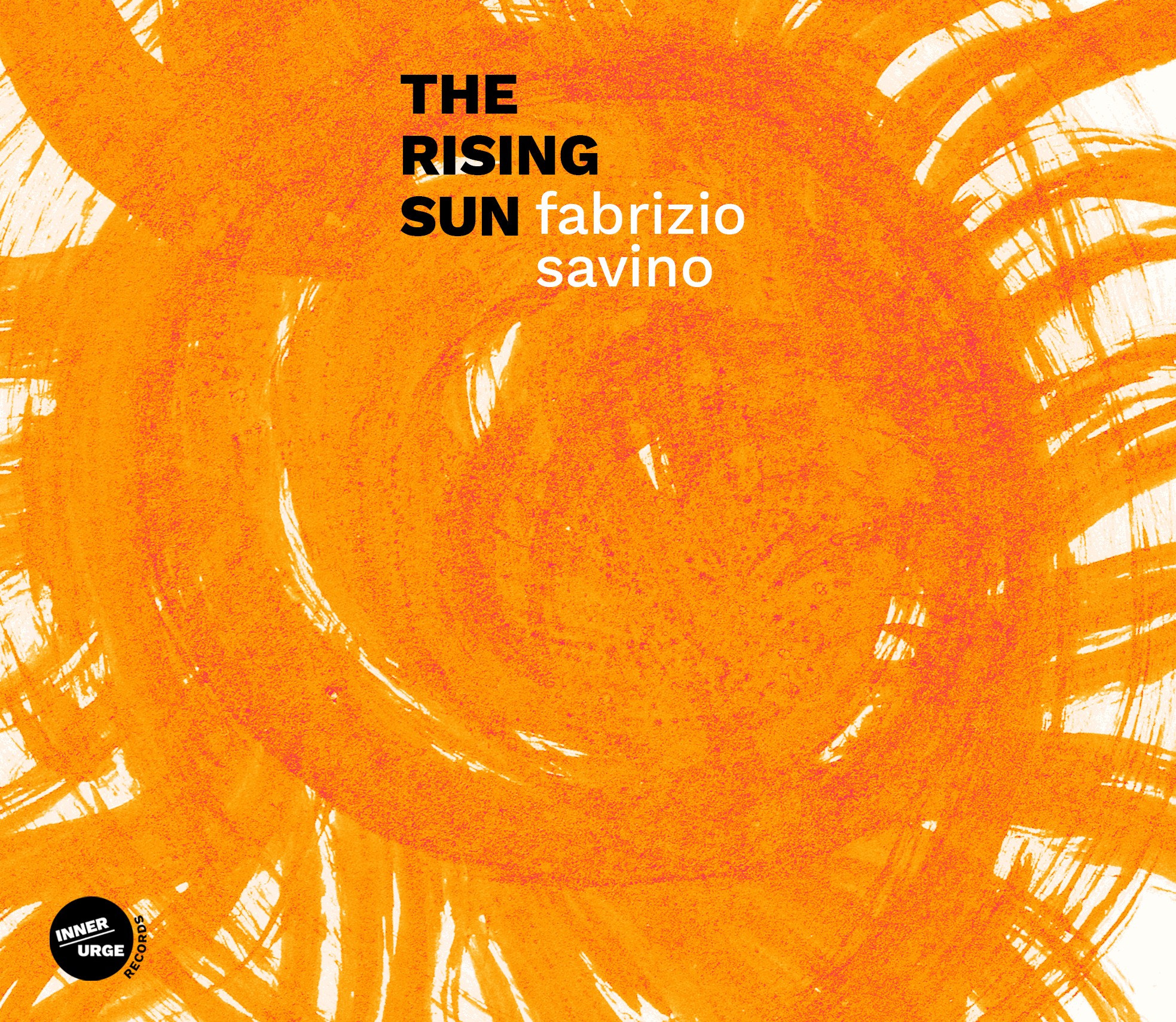 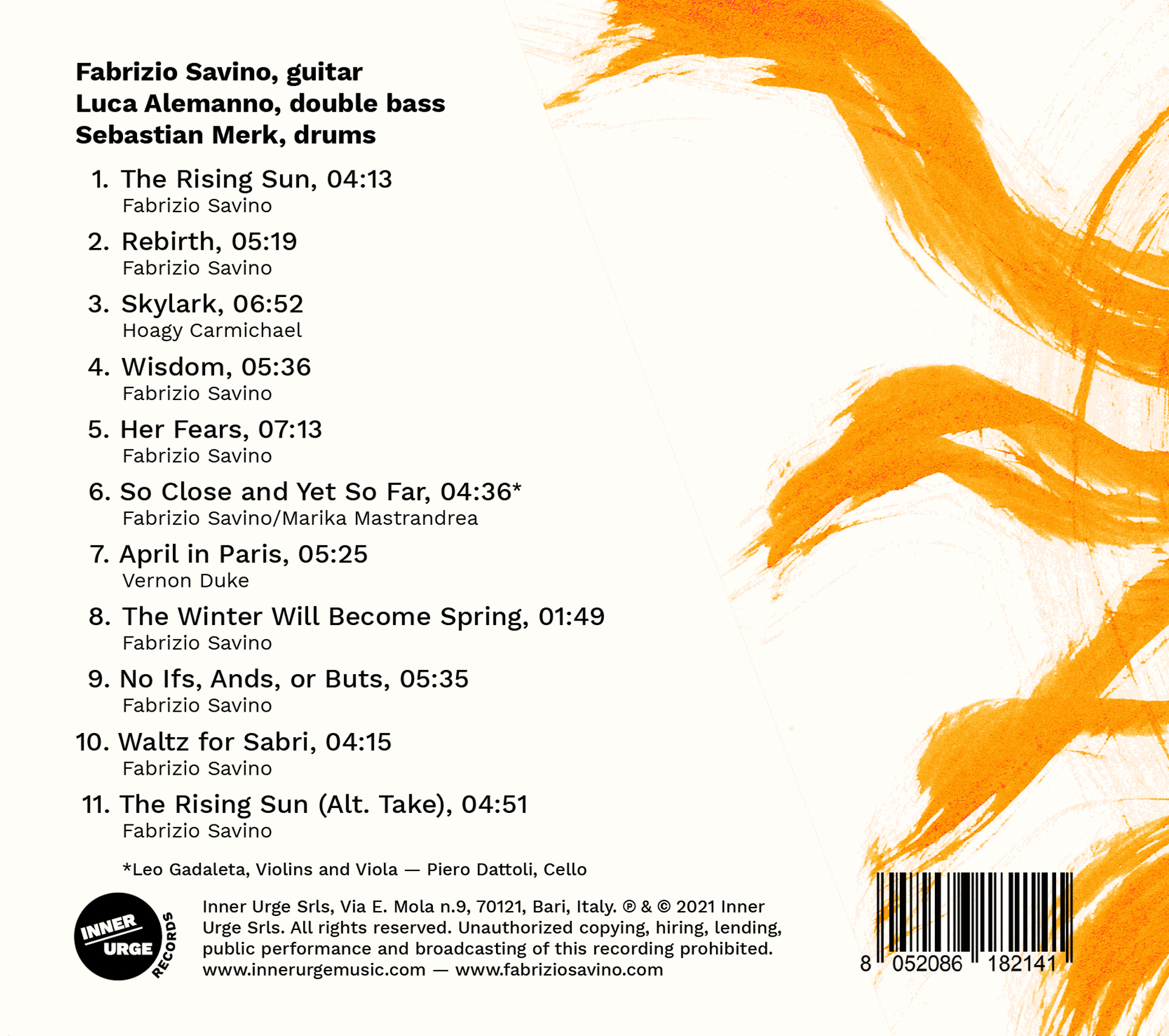 From Saturday July 10th 2021, “The rising sun”, the new and fourth album by modern jazz guitarist Fabrizio Savino, is available on all streaming and download platforms including Apple Music.

The album is also physically distributed worldwide by Inner Urge Records through the website innerurgemusic.com, in Benelux by Xango Music and will soon be available also in France, Japan, Taiwan and Hong Kong through the Albore Jazz distributor.

The album has more than 145,000 plays only on the Spotify platform and has been selected by the editors and included in important playlists such as “State of Jazz”, “Jazz X-Press”, “All new Jazz”, “Jazz Today” and “Modern Jazz“.

The album was introduced and broadcasted by famous radios such as Jazz Fm from London, Concertzender from The Netherlands, 4zzz from Australia, Ara Radio from Luxemburg, Ness Radio from Morocco, RDC from Poland, Radio Rai from Italy and Radio Free Brooklyn from NY. It was also presented in Italy in big Festivals and theaters and is recommended by influent magazines such as the USA Jazz Guitar Today and Downbeat.
The album was also well reviewed by journalist from influential magazines as Diskoryxeion from Greece, Jazz Convention and ilsussidiario.net from Italy, Jazz Quad from Russia, Jazz Mania and Jazzhalo from Belgium and Jazz Life Magazine from Japan.

After the success of his previous production “Gemini” that has won many awards and was broadcasted by the most important worldwide radios (France, Norway, Germany, Italy, Greece, Spain, Finland, USA, Canada and Japan), Savino brings rock sounds through a deep contemporary jazz language. With “The rising sun” Savino explores many sonorities and composes music starting from an inner analysis. The main topic of the album is the “Rebirth”.

The musical journey it’s the transposition of inner energies through the music language and the spiritual research with the practice of meditation and yoga.

The songs of the album were composed over a period of one year and embrace many of the musical forms that have always fascinated the author who was able to translate them into the line-up that best represents him: the Guitar trio.

The modern jazz sound that distinguishes him is intertwined with the sounds that most influenced his adolescence, the rock of Frank Zappa and Jimi Hendrix.

“The Rising Sun” is a musical journey that mix of eleven tracks, two standards and nine original compositions one of which includes an arrangement for string quartet.

To complete the line-up there are the Italian double bass player Luca Alemanno and the German drummer Sebastian Merk, musicians with whom Savino has a particular musical, artistic and human affinity.

For the release of the album, the official videoclip was published on Youtube and on the Facebook and Instagram pages of the label and the artist.

On October 16th was published a video animation, entirely hand made with the technique of ink on paper by the graphic designer Marika Mastrandrea of the MM Visual Communication Design Studio, for the song of the album with the string quartet “So close and yet so far “.

His third album, called “Gemini”, release in 2016, was listed as one of the “100 Best European Jazz Albums” according to the influential Jazzit Magazine. It has been awarded “Album of the Week” by the famous radio show Fahrenheit of the National Public Broadcasting Company of Italy RAI Radio 3 and “Album of the Year” by Sussidiario.net.

The guitarist has been reviewed by several magazines and in an article on All about jazz Roberto Paviglianiti considers him “one of the best young guitarists in circulation stylistically inspired by John Scofield”.

During his career, Fabrizio has shared the stage with some of the greatest artists of the jazz scene, such as Vladimir Kostadinovic, Flavio Boltro, Simon Moullier, Cédric Hanriot, Antonello Salis, Tony Monaco, Nicola Conte e Chiara Civello.

The guitarist from Apulia has played in many important jazz clubs and festivals around the world including the Petrovac Jazz Fest (Montenegro), the Locus (Italy), the Locomotive Jazz Fest (Italy), the Tuscia in Jazz (Italy), the Unisa Jazz Festival (Sudafrica) and the Thailand Jazz Conference (Thailandia).

OFFICIAL VIDEOCLIP OF “THE RISING SUN”

ANIMATED FILM OF THE TRACK “SO CLOSE AND YET SO FAR”